Looks like it's time to break out the Christmas decorations and deck the halls (or in this case the web page) with what ever I can find in the attic and when you're connected to the web it's a very big attic.

It's that time of year when we take the wee ones to the mall and have Santa scare the hell out of them. I think it's some kind of primitive right of passage. Like killing your first giraffe before joining the hunting party. In the States, the ritual for 18 year olds is not voting in their first election. After the age of 40, the tire tracks of life all over you body are the entry fee to adult society. On this trip we're entering the Web Crawler into that group of children scared into behaving by the threat of that specter of Christmas, Santa Claus.

In California, we situate malls the way we used to situate gas stations, one on each corner of every intersection. Now, the gas stations have been replaced by banks with malls attached to them. Since state law requires that a parking space be destroyed for each new car sold, parking would normally be a problem. Not so with this handy tip. Drive to the nearest freeway. Park the car with the rest of the traffic and walk back to the mall.

Entering the mall, gives me a greater understanding of the phrase, "the unwashed masses of humanity." With half the world's population between us and Santa, this is going to be quite a wait.

I feel something hard being poked between my ribs. Have I wandered into some godawful detective story? No, I've been in a boredom induced stupor for the last three hours and the Web Widow is trying to get my attention. Ducking under the next wake up call, I realize their is no longer anyone between us and Santa. LET THE RITUAL BEGIN!

Ceremonially, the Web Crawler is passed to the white haired department store fat man. The innocent sacrifice begins to cry. The red suited giant leans forward with a link of his hip flask to comfort the child. The Web Crawler, seeing his chance, grabs the fat man's wide beard and climbs to freedom.

A short lived freedom. Crying baby, white beard and red cap tumble to the floor in a heap. Now he's really bawling. The fraud in the red suit, now exposed, is screaming in panic. The other parents join in the general chaos but not the children. A deadly silence comes from the children of the damned as they realize they've been duped. 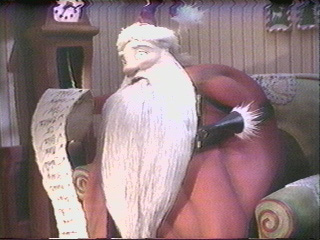 The children edge forward. What was once scattered childern is now a murderous mob. Bearing the Web Crawler and his trophies above their heads like a communist banner in a May Day parade, the bloodthristy mod descends on the cowering man previously known as Santa.

Eyes wide with fear, the cowering man becomes the running man. Donning the white beard and red cap, the Web Crawler leads the mob in pursuit.

But I heard him exclaim, ere he drove out of sight,

"HAPPY CHRISTMAS TO ALL, AND TO ALL A GOOD-NIGHT."